(The article below is reproduced at hegel.net with the kind permission of its author, Stephen Cowley. It first appeared 01/2013 on the hegel.net Hegel mailing list and was published 05/2013 as article with the pictures below on his blog ‘Hegelian News & Reviews’) 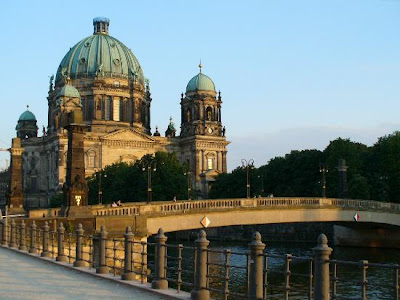 This post continues my coverage of Hegel's time in Berlin (1818-31) drawn from Karl Rosenkranz's Hegels Leben (1844), the first biography of Hegel. Subjects covered are Hegel's life in society and his travels.

To grasp Hegel's situation in his Berlin period, one must recall that Berlin in the 1820s only aspired to greatness. Now that it is connected by rail to the sea via Stettin and Hamburg, people judge it by higher standards, alongside London or Paris.

We should bear in mind also that Hegel was famous and thus every social encounter was a memorable occasion for the other party, material for an anecdote to aggrandise or belittle him, or to illustrate his character. The philosopher has no personal authority, though he honours truth. In this situation, someone obliged to play this role may turn in on himself, as Karl Solger did, or be open to the world, as did Hegel. He had a natural affability that drew a circle of friends wherever he lived, and also in Berlin. He did this spontaneously, with no ulterior end in view; it was simply his way. This itself fascinated the calculating spirit of the Berliners. Letters to his family give an approximate idea of his social circle.

He received many requests for help that could not be satisfied. This led over time to some hostility. One Hungarian wrote, saying that he had set out to memorise Hegel's writings, for example. Hegel had no power to establish professorial chairs.

Rosenkranz thinks that the essay Who thinks abstractly? has a Berlin air in its mixture of satire and metaphysics. Osmo however, says that it was published only posthumously and may date to Jena (says Hoffmeister) or Bamberg (says Kimmerle).

Hegel preferred a Swabian naivety of manner to the mannerisms of a Nante Strumpf (a character from the Berlin stage). Ludwig Tieck, who was born in Berlin and later Heinrich Heine gave this Berlin manner the form of irony. Hegel saw pleasantry in such wit, but was indignant where he saw immorality. Hotho remarks on this in Vorstudien für Leben und Kunst, which has a magisterial portrait of Hegel. He became through this naivety the center of a circle of young North Germans who gravitated naturally towards him. Some copied his gestures and words. His inwardness of spirit had matured and was come to fruition. Alongside conceptual depth, he could nourish his mind with the novelties and stories of the day.

People asked what will be said or done at court and Hegel knew Chancellor Hardenberg and the ministers Altenstein and Kamptz. [Kamptz (1769-1849) was minister of Police from 1817 and from 1819 charged with suppressing 'demagoguery'; from 1832 he was minister of justice.] Hegel's closeness to privy-councillor J Schulze led to people imagining he had influence on appointments. [see D'Hondt's Biographie, 277] Hence many people asked Hegel for favors. Egoism soured some contacts made in this spirit. He was widely felt to be likeable, candid and someone who did not set out to appear more than he was.

Laube [a literary leader of the democratic 'Young Germany' movement in the Vormärz period] attempted a character sketch of his free, even indulgent manner in Neue Reisenovellen (1837). [Extracts from the 'Hegel in Berlin' chapter appear in Nicolin's Hegel in Berichten seine Zeitgennossen (Hegel in the reports of his contemporaries, 1970).] Rosenkranz says that it is wrong to draw a contrast between the naive Swabian schoolmaster and the high society to whose manners he conformed. He writes:

"As a native citizen of a residential town like Stuttgart, Hegel had always lived in the best society, and even sufficiently among the nobility, for him to be seen in such a light." (545)

"simply because he felt the presence of God in his heart, it was impossible for him to submit to purely external formalities." (545)

Outward manners flowed from a sound education, he thought.

He enjoyed the company of Berlin women and this was reciprocated, as he set them at ease conversationally. He would discuss education with a mother, fashion and food with others.

At times, he would reprove Gans for making speeches. Professor Sietze, a former pupil, said:

"I can't explain otherwise the problematic side of Hegel's language: in a certain degree he thought only in substantives, so that when he considered an object, the relations appeared to him, so to say, like figures entering into action with each other; and only then came the necessity of translating their actions into words." (548)

Such was his thinking that every language was a little foreign to him.

However, we cannot limit ourselves to the amicable side of Hegel in Berlin. There was also a rough, determined and relentless side, which some termed tyrannical. One needed decisiveness to overcome party-spirit.

He visited Privy-councillor Schulze, Professor Marheineke, Eduard Gans, Heinrich Hotho, the painters Rösen and Xeller, the banker Bloch, Baer, councillor Förster [see D'Hondt, Biographie, 297] and Dr Sietze. With others, who stood their ground and contradicted him, he was inflexible and would not meet them privately save in a fit of very good humor. Rosenkranz writes:

"He possessed a powerful reserve of anger and fury, and on a day he believed he had to hate, he gave himself over to it without reserve. [...] Whom he cornered, his legs would quake, and Hegel would scold him like a schoolboy." (549)

This was even threatening, but matters were not taken beyond the possibility of reconciliation. Indeed, this (verbal) violence led to more warmth in the end.

The decade before the July [1830] revolution was one of carefree enjoyment. An aestheticism protected by police spies, prisons and censorship reigned which sought to enlarge its judgement by travel. Berlin was well-placed to offer possibilities of travel.

His letters home to his wife (Corr. II L431-41 and Corr. III L476-86; 555-67; collected in 80 pages in SW17) show his personality independent of system, his energy and sensibility, his preoccupations, though not his politics or matters of no interest to his wife.

He observes different effects of light; meets people without preconceived ideas; and is grateful for friendship shown. He visited Snel at Giessen [who was a radical Burschenschaften member - see D'Hondt, Biographie, 373] and philosophers with whose system he did not agree. These included Suabedissen at Marburg, Windischmann at Bonn, Rembold at Vienna and Carnot at Magdeburg, who wrote on machines and geometry.

Art also preoccupies him: he sees paintings, churches, Italian opera in Vienna. He thinks that Belgian universities might be a refuge from Berlin if he falls out with German churchmen.

To a French nobleman in Liège who asked for a brief explanation of his system he replied: "Monsieur, cela ne s'explique pas, surtout en français." His general sympathy for France dated back to his youth; whilst he shared many Dutch tastes. He describes this in the Lectures on Aesthetics.

He met Goethe in Weimar in 1829 and in Carlsbad Schelling. They read of a Russian victory over the Turks that led to the independence of Greece. Schelling began to speak disdainfully of Hegel in 1834 (see Corr III, L609-13 [Note: Rosenkranz probably did not have access to Schelling's letters about this meeting.]).