(The article below is reproduced at hegel.net with the kind permission of its author, Stephen Cowley. It first appeared 8/2012 on the hegel.net Hegel mailing list and was then published 10/2012 as article with the pictures below on his blog ‘Hegelian News & Reviews’)

These are my notes from the brief chapter on Hegel's Science of Logic in Karl Rosenkranz' Life of Hegel (1844). This gave rise to an interesting exchange of views on the Hegel-list on the nature of the Logic, which we concluded was a logic of experience-as-a-whole rather than a pure development of abstract concepts (as my version of Rosenkranz suggested) or a deceptive removal of layers of abstraction to return to a common sense view of the world (as alleged by Friedrich Trendelenberg and Andrew Seth later in the 19th century).

In several instances, Rosenkranz’ chapters on Hegel’s published books are disappointingly sketchy, though interesting all the same, and this one on the Science of Logic (1812-16) fits the pattern.

He starts by saying that Nuremberg, with its ditches outside town walls and views of the country from crowded streets, is a city of contrasting movements aloft and downwards. 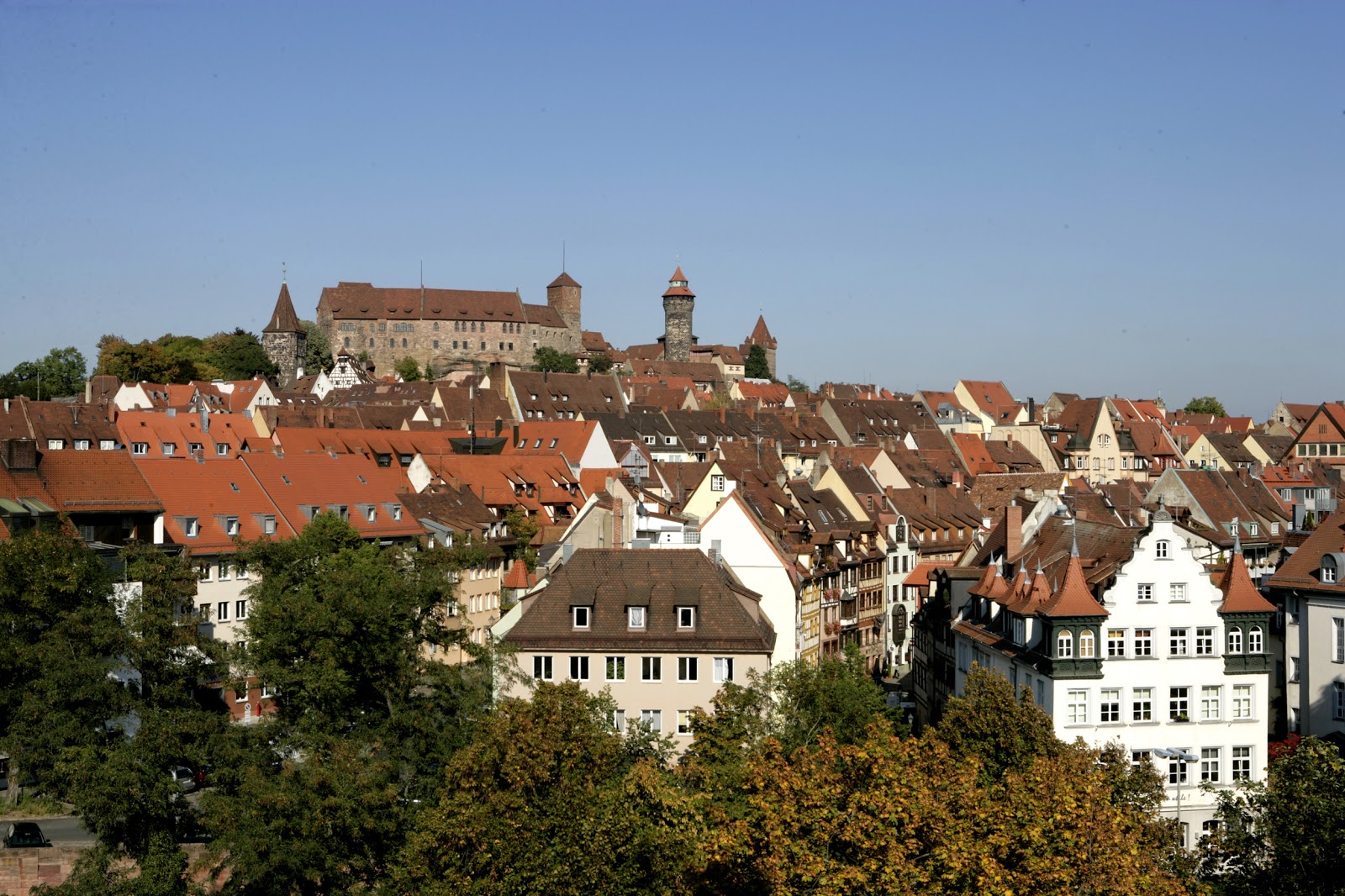 The tempos of life of its Slav and Franconian inhabitants also contrast with each other.  In this town he wrote his Science of Logic, published between March 1812 and July 1816 according to the dates on the prefaces. [The relation of the topography of the town to the book Hegel wrote there occurred to me spontaneously on my visit there, though I would add that the church towers added to the sense of movement.] Hegel described the social life of the town in a letter to Knebel (14/12/1810).  Here:

"Hegel finished his Logic which erected the towers of the eternal categories in the element of purest abstraction."

Logic and metaphysics, Hegel argues, lag behind the other sciences. A people without metaphysics is as astonishing as one with no constitutional theory, he remarks. Mind has achieved a new form, but this needs scientific development. Hegel writes:

“As science, truth is the pure self-consciousness developing itself and it has the form of self[hood]; this in and for itself is the known concept; whilst the concept as such is in-and-for-itself.” (448)

Thus Hegel rejects the idea of Logic as a realm of logical forms indifferent to the matter or content of knowledge. We are dealing with objective thought in Logic, a standpoint which Hegel also terms metaphysics (e.g. in the contemporary Propaedeutic).

Rosenkranz recounts that the equation of Logic with God prior to creation stupefied the theologians, then tries to explain it by treating it as a residue. Hegel also stupefied logicians who saw logical forms as subjective. Also, the positive sciences were sceptical of an apparently a priori aspect to their subject matter. “It never came into Hegel’s head to deny the concrete in such a lazy fashion.” (449) Rather, nature is a surpassing/transcendence (d[épassement) of Logic, as Mind is of Nature.  One cannot find much in the Logic starting from concrete sciences. Being is not some particular being, for example.

In his terminology, Hegel either borrows from German as it has developed since the 14th century, as in Wesen, for example, or forges new terms after the Greek fashion of Plato and Aristotle, though the Greeks were often more audacious than he (e.g. to ti en einai, entelecheia [essence, end-state]). Hence in German we have:

These are terms of art in other words, the intended meaning of which is most fully indicated in the Logic, though they are used already in the Phenomenology.

Hegel compares the theory of syllogism to arithmetic, as forms of calculus. Living thought on the other hand needs to know that contradictions do not resolve to zero, that a negative is just as much a positive result. Only a particular thing is negated. [Osmo the French translator equates chose and causa in translating Sache rather than Ding.] A richer concept emerges from the wreckage of such thinking.

Hegel divides ontological and ideological (that is, objective and subjective) Logic, but with a middle point of essence, where the terms do not pass into one another, as in quality, quantity and measure, but have meaning only as contrasts. i.e.

- identity and difference
- content and form
- cause and effect


The Doctrine of the Concept

The Doctrine of the Concept is the most original part of the book, thinks Rosenkranz. The determinations of the Concept are a unity of immediacy and mediation. Thus they develop, or else each moment is the whole. In other words, the material divides itself into the particular, which is realised in the individual. This is interesting, but in my view it is unfortunate that the scope of the assertions is not more clearly indicated.

In the doctrine of the Concept, Hegel discusses his relation to Kant and the relations of Logic and the real. He equates Being with intuition and sensation, or with space and time; essence with representation and perception, or inorganic nature; and the Concept with self-consciousness, or organic nature. But the logical forms are independent of their realisation.

The step at the end of the Logic to nature is “ein freies Entlassen” (a free releasing). Rosenkranz points out that this Entlassung is on the part of the Idea. i.e. conceived in unity with the real. He brings in St John’s Gospel, but says that Hegel is not being gnostic or logo-theistic, as Schelling later alleged. Neither was St John by the way, or so it is widely thought (e.g. by T F Torrance).

From 1812, Hegel was pursued by criticism of his ideas on the “identity of being and non-being.” Rosenkranz refers here to a correspondence with Pfaff, a mathematician, on Hegel’s views of Newton and the differential calculus, which survives on Pfaff’s side only.

From the discussion on the Hegel-list, it emerged that the Kantian distinction of a priori and a posteriori plays little role in Hegel's Logic. Perhaps, I felt, the following quote sheds light on Rosenkranz’ interpretation of Hegel's Logic:

“Hegel never disputed the necessity of experience as such, but he well and truly showed how, by its own contradictions, it [thought] pushes onward from itself to universality and to the necessity of determinations.” (from Rosenkranz, op cit: Book 3 chapter 2)