(The article below is reproduced at hegel.net with the kind permission of its author, Stephen Cowley. It first appeared 4/2012 on the hegel.net Hegel mailing list and was then published 6/2012 as article with the pictures below on his blog ‘Hegelian News & Reviews’) 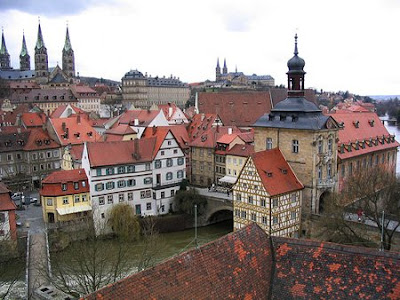 There follows an account of Hegel's time in Bamberg as editor of the Bamberger Zeitung, drawn from Karl Rosenkranz's Life of Hegel (1844), followed by Rosenkranz's analysis of Hegel's essay on The German Constitution in the subsequent chapter, which later commentators state that he misdates to this period and which certainly has a less mature style than he attained in the Phenomenology and Critical Journal articles.

Firstly, Osmo notes that this period is also the subject of: Between Phenomenology and Logic: Hegel as Editor of the Bamberger Zeitung (Frankfurt, 1955) by W R Beyer. I seem to recall that Kaufmann cites this.

Hegel now felt that Jena was cut off from the world. It attached a universal value to books that sold a hundred copies. In contrast, Heidelberg was a greater conduit of influence. Knowledge that did not penetrate reality was superficial, he felt. [Of course, there was also the relationship with Mrs Fischer, as we now know.]

Hegel thus accepted a move to Bamberg to edit the local newspaper, the Bamberger Gazette (or Times). In this venture, Hegel was a commercial associate of the proprietor. He had to ensure that the printing equipment was maintained and return it in the state he found it. In February 1807, he wrote that he considered the position interesting, but transitory. He hoped to approximate the tone of a French newspaper, but also to maintain the pedantic impartiality that was expected in Germany. [This suggests a slightly cavalier attitude to factual accuracy, but it is a passing remark.]

Bamberg itself was a Catholic centre. In 1807, Niethammer and Paulus, the biographer of Spinoza, lived there. Here at last Hegel had the opportunity to see a Catholic town at close hand. There were festivals and a French Theatre.

Hegel remained as editor for about a year to Autumn 1807. Edouard Gans described the articles in the newspaper as spirited and politically committed, but Rosenkranz says bluntly that Gans is mistaken. There were no editorials and the tone was factual. Rosenkranz hints at Napoleonic censorship. The rise of Napoleon and the destiny of Prussia were at stake in the public life of the day.

The letters of Hegel to Knebel (Correspondance I, L104, 109, 131) show a degree of self mockery, but also the efforts he made to acquire information from elsewhere in Germany. Knebel was a former Prussian army officer who lived at Weimar and had translated Lucretius, the Epicurean philosopher and poet. For his part, Knebel recounted a meeting of Napoleon and Tsar Alexander at Erfurt. Napoleon, he recounted, had an air of melancholy that, he remarks, Aristotle thought was an element of all greatness of character. Napoleon also had several conversations with Goethe and this reconciled him a little with local opinion. [Osmo refers to Hoffmeister who confirms this from the journal of Goethe for 26 September to 14 October, 1807.]

The Phenomenology was now expected [from the publisher Goebhardt] by the friends of Hegel. The publisher Frommann distributed some sheets of the Preface. Knebel wrote admiring it (Correspondance I, Letters 105, 110), but regretting the absence of concrete illustrations. [To interject, this has been a common reproach ever since and it is interesting that the earliest readers felt the same. The intended audience is thus not automatically an explanation for the obscurity.]

Letters to Hegel from Paulus, Seebeck and Knebel show that one effect of the Phenomenology was a more critical attitude towards Schelling. [Perhaps then, this contributed to the negative reaction of Schelling from November 1807. The correspondence with Paulus also suggests that Spinoza would have been in the air for Hegel at this time.]

Chapter Sixteen The Critique of the German Constitution 1806 to 1808

This is a fairly lengthy chapter. Osmo advises that the manuscript of The German Constitution exists in two versions from 1801 and 1802, with an introduction from 1799. The previous scholars Haym (1857) and Rosenzweig (1920) put it in its proper date. Thereafter, Georg Lasson published in in 1923, Mollat in 1935. (Osmo does not say so, but I think there is also an earlier version by Mollat and another later version by Habermas.) Osmo refers to articles in Hegel Studien 2 and 4 by Schuler and Kimmerle (1963, 1967) as giving a definitive account of the date. He does not state what makes their account definitive in his view.

Rosenkranz states at the outset that Hegel wished to become the Machiavelli of Germany (384). He notes that Fichte read Machiavelli around this time also, indicating that his ideas were in the air. He returns to this at the end of the chapter. He then cites the famous dictum of Hegel that:

Voltaire also referred to Germany as a constituted anarchy. Hegel thus proposes in his essay to draw up a new constitution for Germany. However, circumstances were not favourable to its completion or publication. A letter of Hegel to Zellmann (23/1/1807, Correspondance I) shows his sense of French military might. The French, he supposes, had left behind daily existence and the fear of death. The Germans would fight about religion, not politics. He then tries to analyse the situation of Germany, though in a partly polemical spirit. Personal courage was not an explanation of German weakness, but rather regional division and lack of generalship. Neither were national debt or bankruptcy; not ethics, culture or religion. It was a matter rather of the feudal form of the State. In Germany, the former vassal princes had become in effect sovereign [in effect is Wirklichkeit].

Warfare had been changed by gunpowder from a duel to a combat of massed ranks of men. The universality of death left no significance in a variety of uniforms. In finance, payments in kind had been replaced by another universal, money. Rosenkranz summarises:

"From the financial angle, whilst the Middle Ages were characterised , under various forms, by a mode of contributions in kind, modern times have centred everything on the power of money, understood as a universal value of all things and as the most mobile medium in this area." (386)

In the Middle Ages in Germany, war was coloured by culture and religion. The idea grew though that a State religion must not be. Fiat justitia aut pereat mundus [Let justice be done though the world perish] was adopted as a maxim in Germany. The rational content of State activity was not looked for and there grew a limitless control over all spheres of life. Hegel comes to the conclusion that German politics had to orient itself towards an external concentration of its power to be able to protect itself against the assaults of other nations. A common foreign policy and centrally funded Army should go along with free cultural and social development internally. From here on, Rosenkranz combined paraphrase and citations. [To interject here, my memory of the text is is of a biased seeking out of confirming instances for an idealistic vision of German unity. The thing did not deserve publication as a dispassionate political analysis, but only for purposes of biography.]

Hegel turns to a survey of recent European history. France, he recounts, has destroyed the German Empire, leaving the states (L[[ä]nder) like fruits lying under a tree to decay or be picked at random. Public debt in the South of Germany will prolong the misery of war. National unity is manifested in war more than peace. Some Lander have come under foreign control. Hegel states that he wishes to understand, rather than lament over what is, as this will produce a greater serenity of political vision. Things are as they must be, not as they should be. They are not the outcome of chance. The German attribute necessity to law and duties, but outward events do not follow this necessity. [To interject, this is of interest with regard to his philosophy, especially the Philosophy of Right.]

Germany was thus isolated. It needed not only to defend itself, but to resist external aggression. Representative participation on the large scale of a modern State is not possible, so he thinks. What needs to be established then, is a central government assured of the loyalty of the people, as where a Monarch is determined by birth, accompanied by a delegation of real power to a local level.

Hegel then turns to the peace treaties signed by German statesmen. Half of Germany had been at war, whilst the rest was in internal conflict or neutral. Population and fertile land do not compensate for a lack of rational organisation for common defence. In Germany, obligations are bogged down in legal processes without resolution. Barbarism in practice is a crowd that constitutes a people, but not a State, he says. (394). A cultivated state puts law, i.e. universality, between the Monarch and the individual citizen. He rails a little against detailed regulation of private matters, for example filling in forms to repair a window.

How then to achieve unity? Hegel writes:

"Such an event has never been the fruit of reflection, but of violence." (395)

The strength of a conqueror that gives constraint, are meant here. However, such a Theseus must grant popular participation in matters of general interest. He must be able to bear up under hatred, as did Richelieu in France for example, for the sake of a political goal. Hegel speaks directly here of Machiavelli, whom Rosenkranz earlier invoked, in his discussion of Italy. Osmo notes that Frederick the Great wrote a book Anti-Machiavelli (1739). Hegel writes that Frederick himself denies that treaties between States are binding when they no longer serve state interests in his preface to the History of the First Silesian War. The hatred for The Prince thus does not speak against the truth of its content. Hegel writes:

"Machiavelli's Work remains a great witness of his time and his own conviction that the destiny of a people running to its own ruin can be saved by genius." (396)

The public has reclaimed his reputation by supposing that he spoke ironically. Osmo remarks that Rosenkranz omits the final remark of Hegel in this passage that The voice of Machiavelli was extinguished without leaving an echo. [To interject, I am not aware of any comparison of Hegel and Machiavelli, except perhaps the work of Friedrich Meinecke, but it sounds an challenging comparison to make.]