(The article below is reproduced at hegel.net with the kind permission of its author, Stephen Cowley. It first appeared 02/2013 on the hegel.net Hegel mailing list and was published 08/2013 as article with the pictures below on his blog ‘Hegelian News & Reviews’) 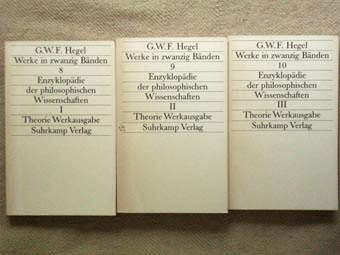 This post summarises Karl Rosenkranz's account of the second and third editions of Hegel's Encyclopaedia of Philosophical Sciences (1827, 1830). We have already translated his brief chapter on the first edition here.

The second and third editions of the Encyclopaedia of the Philosophical Sciences appeared in 1827 and 1830 respectively. They continue with the tripartite format of a Logic, Philosophy of Nature and Philosophy of Mind of the first edition.

Although welcome as proofs of public receptiveness, the later editions required rewording in such as way that, as Hegel acknowledged, the unity and synoptic purpose was not as well realised. In letters (Corr III, L579, 581), he expresses concern about becoming lost in details.

A new Introduction (Vorbegriff) 'On the Position of Thought with regard to Objectivity' was included in the second edition. Here Hegel discusses in separate chapters:

In the first edition, remarks on these other philosophies are confined to the brief preface. These essays, although written with clarity and energy, raised the question of the relation of this partly historical introductory material to the Phenomenology.

The philosophies of nature and spirit were expanded, but unevenly. Replies to criticisms and misunderstandings were included. The new preface addressed the relations of philosophy and theology, discussing the Pietist ideas of Tholuck. Some saw crypto-catholicism in his defence of the Trinity against Tholuck's accusation of scholasticism. This was also seen in his invocation of Jacob Boehme and Franz von Baader. Some wondered aloud how many people would be able to make sense of this mysticism and its idiosyncratic terminology.

The Preface to the Third edition shows Hegel's disappointment at the new misunderstandings which his attempts to explain himself had given rise to. [Note, these prefaces are only summarised in the Wallace edition, but there are translations in the Hackett edition.]

The theologians, says Rosenkranz, were all the more opposed as they realised that Hegel might after all be right in reconciling his philosophy and Christianity. However, "that philosophy should have to be able to examine what is true in religion, they did not agree." (610).