(The article below is reproduced at hegel.net with the kind permission of its author, Stephen Cowley. It first appeared 02/2013 on the hegel.net Hegel mailing list and was published 07/2013 as article with the pictures below on his blog ‘Hegelian News & Reviews’) 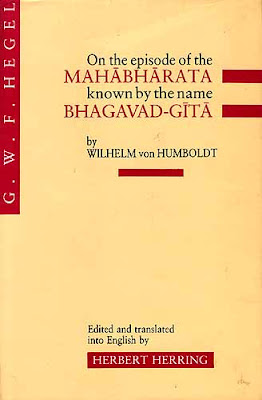 This post summarises Hegel's part in the founding of the Annual for Scientific Criticism in Berlin [KF: Most of its issues can be downloaded here as scanned PDFs in German] and the articles he wrote for it. The first of these (English translation above) addressed the story of Arjuna from the Indian dialogue in the Bhagavad Gita. The material is drawn principally from Karl Rosenkranz's Hegels Leben (1844).

Hegel wrote a letter to the Ministry of Education on the lack of a critical review in Berlin (SW11, 8-30). This recalled his early essay On the Essence of Philosophical Criticism (1802) and the Maxims on the subject from 1806. The orientation should be towards the content, he still thought. Hegel wanted an official journal, modelled on the Journal des Savants of Paris. However, to prevent official endorsement or toadying to the government, there should be no anonymity for contributors. Rosenkranz writes:

"The circle of Hegelians rightly saw in the banditry of anonymity, as Gans was in the habit of saying, the curse of literary criticism." (586)

Hegel confined himself to saying that a signature preserved independence from government for contributors and on the part of the journal. He dealt with the project down to its financial and practical details.

The State did not support this, but it was revived as a private venture by Gans and Cotta, who discussed it in Paris in 1826 (See Gans, Recollections, 1836) under the title Berlin Annuals for Scientific Criticism (Jahrbücher für wissenschaftliche Kritik; see also Corr III, L575). Eduard Gans (Works available as PDFs in German) was a liberal who wrote on the history of property law and is famous as the tutor of Karl Marx. It was preceded by the establishment of a Society for Scientific Criticism, which took place in Hegel's house. Rosenkranz himself joined this in 1829. He reproduces Gans' recollection. Varnhagen also played an important role, but in opposing Hegel's influence. Rosenkranz cites him:

"Now, when the Annuals was launched, Hegel became more and more difficult, more tyrannical, and in the course of the work-meetings behaved in so strange a way that, in the feeling of the whole group, things could not continue on this footing and the business was going to fail." (589)

Varnhagen thus opposed Hegel and there was a violent quarrel: hard words were exchanged, but they made up. The other principal editors were: Marheineke the theologian; Schulze the physiologist; Böckhe and Bopp, who covered philology; and Hotho the aesthetician. Gans managed it at first, then von Henning.

The Annuals did not at all have Hegelian philosophy for their exclusive object, but philosophy and theology were particular concerns. There was resistance to it: Boine [a liberal and later a Young German and exile] suspected it of being an instrument of the Prussian government.

Its formal proceedings were intended to ensure transparency, but were seen as pretentious. Many works were sent to Hegel in the hope he would review them in the Annuals. As this was not humanly possible, many authors conceived a dislike for Hegel, which was expressed particularly after his death. There was also opposition to his own reviews, especially from theologians. A certain sourness of tone crept into Hegel's writings from this time because of this.

Hegel lived to see his philosophy taught in Paris; in Louvain in Belgium by Seber, a friend of van Ghert; at Copenhagen, by Heeberg; and in Finland, though in Swedish. A Dutch journal was edited at La Haye.

Meanwhile, Fichte's son (I.H. Fichte) sought his support. Feuerbach opposed the theologisation of the system; whilst Göschel advocated a more biblical focus for the philosophy of religion. There was then a quarrel of Pietists and Rationalists at Halle where Göschel taught. Heinrich Leo, an opponent of the Young Hegelians in 1838, was helped by Hegel. Rosenkranz names several others, some of whose thoughts originate in correspondence from this era.

Hegel told the story of a father who complained to him that his son had become lazy and taken to tobacco after signing up for his course and who thus lectured him on the consequences of his philosophy.

Hegel took a very active part in the Annuals, attending the editorial meetings, reporting on reviews submitted and writing material. The articles he published were as follows:

The Review of von Humboldt

His first article for the Annuals was a review of Wilhelm von Humboldt's Memoir on the Religious System of India, where he examined the Bhagavad-Gita (part of the Mahabharata). This review appeared in 1827 and there are French and English translations (for French, see Michel Hulin, Hegel et l'Orient (1979), with bibliography of Hegel's sources; English version above, published in Delhi). Hegel was influenced by contemporary polemic that saw ancient Indian thought as pantheist, though not in the hylozoist [theory of living matter] sense that this word also then carried. Hegel was "very interested in Berlin in the study of the East". (595) 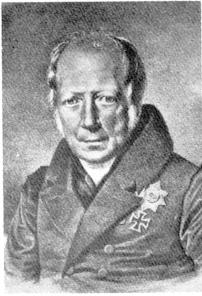 Von Humboldt (1767-1835, above) was a Prussian politician who had founded Berlin University in 1810. His brother Alexander was a famous naturalist. Humboldt expressed his gratitude to Hegel, but elsewhere said of him "that a philosophy of such a sort should put down deep roots, I cannot persuade myself". (596) Noting his obscurity and lack of ease in speaking even about ordinary things, he said:

"The public seems to me divided in two categories as regards Hegel: there are the unconditional sectaries and there are those who turn him about sagely, as they would with a rough-hewn stone." (596)

Humboldt felt that the review was directed against him and questioned what the value of it could be as philosophical history, though he also expressed regard for Hegel's abilities.

The Reviews of Solger and Hamann

In 1828, Hegel wrote another review, on Karl Solger's Writings and Correspondance, which we have already covered. Here he evaluated the whole 'romantic school', including the 'irony' of the two Schlegels, Tieck and the contrast between mystical effervescence and the conceptual clarity of dialectical philosophy. 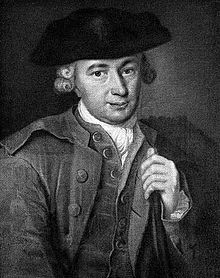 Also in 1828, he reviewed Hamann's (1730-88, above) writings, edited by Roth. Again, there are English and French translations of this (for French, see Jacques Colette, 1981). Hamann, the 'magus of the North' had been a friend of Kant, Herder and Jacobi. Hamann had passed, according to Hegel, through and early period of frivolous dissolution, followed by one of intense piety and asceticism, and lastly a period of scientific tolerance. He had intuitively grasped the deepest problems, but had not developed his insight systematically. Hegel admired his genius and his biblical faith which was pitted against the religious scepticism of the Enlightenment. He was less patient with Hamann's contrary humor and penchant for symbolism. One of Hegel's pupils, Sietze, took issue with this in a History of Prussian Law, in which he saw Hamann as a 'Prussian prophet'.

Hegel also reviewed Göschel's Aphorisms on Absolute Knowledge and Ignorance in relation to Christian Faith. Göschel had expounded the views of Hinrichs. Writing clearly, as a lawyer could, he took issue with the theology of feeling's interpretation of Jacobi as an orthodox Christian, vindicating instead speculative philosophy in this role. Here and in his Proofs of God's Existence, Hegel said that this demonstration of the Christian character of his philosophy was an honor. At this time, says Rosenkranz, many think that rejection of Christianity is a sign of sound philosophy. However:

"For we who have learned to know, from its beginnings, the way Hegel related himself to theology, the fact that Hegel was convinced of being not at all in contradiction in his speculation with the essence of Christian faith, even of being positively at one with it, has nothing surprising in it. But for the public at large, the idea of such a unity was quite unbelievable in its novelty." (599)

They doubted his sincerity, or thought him enfeebled through age. Those who wished to deny knowledge to make room for faith now sometimes gave a Hegelian turn to their speech.

The Proofs of God's Existence

Hegel was also drafting a work on the Proofs of God's Existence. Here he discusses the ontological, cosmological and teleological proofs from a speculative standpoint. Rosenkranz thinks this work is important as bearing witness unambiguously to his admission of a personal God. Rosenkranz thinks that the term 'subject' is better than 'person', which suggests limitation in space and time. For Hegel:

"God is activity, free activity, relating itself to itself an remaining with itself." (Proofs, lesson 3. (600))

Our ideas of God contain mediation. Rosenkranz thinks it disappointing that this work, in Hegel's handwriting, is neglected in favour of remarks drawn from student notes of his philosophy of religion course, when the relation of speculation and religion is discussed. Hegel thought that God's relation to the world could not be that of an arbitrary lawgiver, for this would admit unreason into God. Hegel here reconnects being and thought, separated by Kant, in a new concept or figure.

The success of the Annuals attracted both collaborators and detractors of the Hegelian standpoint it represented. Hegel ('der Alte' to his students) was encouraged to take sides. He reluctantly complied. Thus he wrote two reviews in 1829 on:

These reviews contain an analysis of the popular use of abstract concepts, such s being, nothing, becoming, one and many. This sheds light on his relation with the later Schelling. Schelling takes 'being' in the sense of 'all that is' and distinguished positive and negative philosophy by separating essence from existence. This is central to his way of rejecting Spinozism. Substance is determined as existence and as concept of self. In these essays, Hegel distinguished abstract and concrete being, in a magisterial tone. There was an element of tartufferie [religious hypocrisy] in his opponents, he said, which they in turn resented his having said.

Two final reviews appeared in 1831, directed against the circles that were identified after his death as Schellingian and Herbartian. These were on:

Görres was influenced by Schelling and went on to systematise Catholic mysticism. For information on Ohlert, see Corr III, L656. Hegel rejected Görres' number mysticism and his nebulous historical subject-matter. Ohlert was a pupil of Herbart from East Prussia. Here Hegel addressed Herbart's ideas of contradiction, essence, etc at a scientific level. These, thinks Rosenkranz, are more significant ideas than Schelling's later philosophy.


We discuss separately the late essay on the English Reform Bill, which appeared in the Preussische Staatszeitung (1831).