(The article below is reproduced at hegel.net with the kind permission of its author, Stephen Cowley. It first appeared 01/2013 on the hegel.net Hegel mailing list and was published 06/2013 as article with the pictures below on his blog ‘Hegelian News & Reviews’) 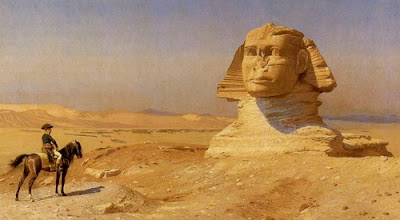 This post discusses Hegel's Berlin lectures on the philosophy of history and his late studies of eastern thought. The material is drawn from Karl Rosenkranz's Hegels Leben (1844).

The Philosophy of History

Hegel gave a course on the philosophy of history five times between 1822/23 and 1830/31. Previously, Herder and Krause had introduced the biological analogy of the ages of man into history; but this is alien to Hegel's idea of mind, which knows an infinite development. Stutzmann of Erlangen also taught this subject. Another precedent was Fichte's Characteristics of the Present Age. Hegel gave a forward drive to the subject on his own account though.

The subject is not an exact science. The sciences that border it are, as regards the existence of laws:
- physical geography
- psychology
- practical philosophy.
Hegel ends his own practical philosophy with history. The concept of an event is particularly relevant here. In terms of discerning necessity in the course of events, erudition and reproductive ability are key.

In the Philosophy of Right, Hegel presented world-history as the tribunal that judged different national spirits. However, no people would accept another as its judge. Hence, a spirit of humanity presided over the struggles of nations and their private rights. Public opinion and customs restrain state action; whilst Christianity and commerce impel people towards mutual recognition. Kant and Fichte had the idea of international law (droit cosmopolite) which in Hegel is played out in universal history.

Those who made the Philosophy of History the culmination of the system are thus wrong. Both the ethical law of individual states and the phenomena of absolute mind are absolutes for Hegel. Rosenkranz writes:

"One must take care only not to push the understanding one has of Hegel so far into abstractions, as if he held law and ethical life in itself for other than absolute, for other than sacred and divine, from the fact that he posits the absoluteness of the spirit in art, religion and science as absolutes." (566)

"Now, the fact that what is substantial should take place, should be present and maintain itself in the practical actions and in the convictions of man: that is what we call the State." (566)

The first edition of the Philosophy of History concluded:

"The development of the principle of mind is the true theodicy, for it is the understanding that the mind can only free itself in the element of spirit, and that what has come about and happens every day is not content with coming from God, but is itself the work of God." (566)

This course gave Hegel great popularity amongst a mixed public, who were doubtless surprised to hear so much practical and common sense from a philosopher, such persons being reputedly so bookish.

But there was also misunderstanding, when Hegel said that he confined himself as philosopher to the Idea, and thus had to leave out many interesting characters and the suffering or joy of their fate. It was wrongly thought that he must be indifferent to individuals. He did not underestimate or deny the freedom of individuals, or reduce them to organs, of no soul. Thus he speaks of Socrates, Pericles, Alexander, Caesar, Luther. Nor did he diminish the dignity of "ordinary" mankind. Such lives have an "infinite value" (568) that the fracas of world-history and temporal things leave intact. He wrote:

"The piety, the ethical life proper to a limited existence - that of a shepherd, a peasant, in his inwardness and his limits concentrated on a few quite simple, living relationships - have an infinite value and the same as the piety and ethical life fitting for a cultured intelligence and an existence rich in the extent of its relations and its acts. But in general, it must be held as certain that what justifies itself in the world as noble and magnificent also has something that has risen above itself." (568)

These lectures allowed him to return to subjects he had last addressed in the last third of the Phenomenology. He became so absorbed in them that he neglected his correspondence.

Late in life, Hegel made a concerted attempt to study Eastern thinkers and societies. In a letter, Hegel tells how he has been looking at quarto and octavo volumes on China and India (Corr II, L442). He thought more in his late lectures about the East, supporting the poetic efforts of Goethe (in the East-West Divan) and others (especially Hammer). These relied on the poetry of Hafiz de Chiraz (1327-90) then recently translated. He studies Indian philosophy and Persian mysticism (in the work of Rumi, 1210-73). Yet he rejected pantheism, criticising such Indian standpoints for "lacking subjective freedom". (570).

Rumi founded the "whirling dervishes" sect. The carefree serenity of his devotion had a beneficent effect on Hegel faced with modern tendencies to bring vanity and self-satisfaction into worship. The theologian Tholuck and others also came under its influence. The Berlin Muses' Almanac contained the degeneration of this goetheo-hegelian regard for the East.