(The article below is reproduced at hegel.net with the kind permission of its author, Stephen Cowley. It first appeared 01/2013 on the hegel.net Hegel mailing list and was published 02/2013 as article with the pictures below on his blog ‘Hegelian News & Reviews’)

This is a brief note on the biographical facts on Hegel's relation to Goethe's theory of colours (Farbenlehre) and Schopenhauer's modification of the theory, drawn from Karl Rosenkranz's Life of Hegel (1844). 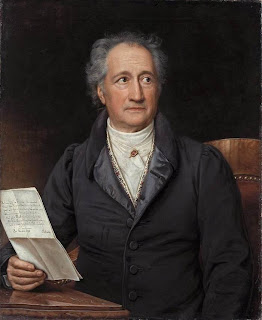 In general terms, in his theory of colours (Farbenlehre), Johann Wolfgang von Goethe (1749-1832, above in 1828) disputed the physico-mathematical theory of colour in Newton's Opticks. Goethe sought in its place to do justice to the psycho-physiological aspects of colour. In addition to observing the properties of light, he analysed the phenomena of vision, for example complementary colours (as in the colour wheel above). His Theory of colours was published in 1810. He also studied plants and minerals in addition to his literary output.

A Prussian councillor, Shultz and a lecturer von Henning did experiments and gave talks on Goethe's theory of colour. Hegel's patronage of the theory, by incorporating it into his philosophy, gave it further currency.

He and Goethe exchanged letters on the subject (SW17; Corr II, L381-93). Goethe sent a vase illustrating his theory and Hegel sent a light-hearted reply, saying that wine showed spirit present in nature and the glass and wine together were like Ahriman and Ormuzd. Goethe called Hegel the Absolute and himself the Urphaenomenon (a central term of his physical theories) in a similar spirit.

There is further discussion of Hegel and Goethe in Karl Göschel's Hegel und seine Zeit (1832). An opponent of Hegel from 1827, Schubart, also knew Goethe. Rosenkranz observes that:

"The unity of Hegelian speculation and Goethean poetry became quite a dogma of the Hegelian school." (521)

Göschel and others indulged in this.

Schopenhauer had met Goethe in 1813-14 and had written On Sight and colours (1816). After that he applied to Berlin in 1820. Hegel copied Schopenhauer's remarks on Goethe and colour from his curriculum vitae.

You can see a summary of some of Goethe's views on colour as a video (in German) here:

[Please note: there are several such presentations. One that I used to link to turned out to be subject to claims of copyright and thus the link broke. If the above link is not working, you will probably find it easy enough to find similar information on youtube.]


See also: the German division of hegel.net has several articles on Goethe’s Farbenlehre