(The article below is reproduced at hegel.net with the kind permission of its author, Stephen Cowley. It first appeared 01/2013 on the hegel.net Hegel mailing list and was published 01/2013 as article with the pictures below on his blog ‘Hegelian News & Reviews’)

Hegel's Philosophy of Right appeared in 1821, though the Preface was written by 25 June 1820 and the book was finished that year. As for content, we move from the immediacy of personal right, through morality (which comprehends personal well-being, intention and moral consciousness of others) to Ethical Life (Sittlichkeit), in which Hegel includes the family, civil society and the State. Morality is now an independent middle term between abstract individuality and the State, rather than diluted in other material. It becomes the essence of objective will, so to speak. [There is a comparison with the middle book of the Logic here.] The mediating role of civil society between the family and the State in the section on Ethical Life is also noteworthy as a middle term. The closing section on world history, developing from the external relations of the State, is Kantian in content, or so thinks Rosenkranz. [Later thinkers tend to see an opposition here.] Hegel adopts the form of distinct numbered paragraphs.

If the Philosophy of Right had been issued as it stood, it would be more studied than discussed, comments Rosenkranz, but Hegel added many remarks bearing on the questions of the day, such as

- the subsidiary nature of Roman law to modern law

- the weakness of conscience independent of an ethical community

- the relation of State and Church and subordination of the latter

These gave rise to discussion on their own account. Since the turn of the century, Hegel had preferred a more determinate idea of the State, the Estates and the role of government to the indeterminate notions of people, liberty and equality. He conceived the State as ethically self-conscious in relation to the Church. Even at Jena, he had endorsed the idea of hereditary monarchy. Rosenkranz concludes: > “Remembering this, we can only reject the image of Hegel elaborating > his concept of the state in the service only of the Prussian > government, in a conscious renunciation of his philosophy.” (510) This is significant in view of widespread acceptance of this image of Hegel in writers as diverse as Rudolf Haym and Bertrand Russell.

Prussia and the Restoration 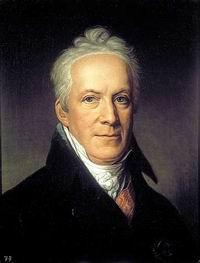 At this time, Karl August von Hardenberg (1750-1822, above) was Prussian Chancellor and he was a reformer. This was the political context in which Hegel vindicated at the level of principle:

- a people making its own laws

- the public nature of justice

- freedom of the press.

In a letter to Chancellor Hardenberg dated October 1820 (Corr II, L376), Hegel enclosed a copy of the Philosophy of Right. This was prior to the Congress of Verona in December 1822, at which Austrian statesman Metternich would oppose Hardenberg. The Congress of Verona was called to stall liberal ideas. It was not doubted that popular representation would be brought about throughout Germany in a short timescale. In general, Hegel was impressed by the large perspectives taken in Prussia of political developments after having spent so long in small German states. 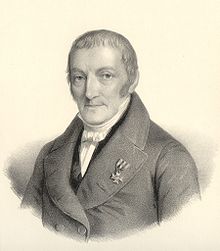 In the Philosophy of Right, Hegel opposed at the level of political theory Karl Ludwig Haller (1768-1854, above), a diplomat of a conservative cast and author of Restauration der Staatswissenschaft (Restoration of Political Science (volumes 1-4, 1816-21, volume 5, 1834)). Haller was greatly opposed to the French revolution. He reduced the State to private law, i.e. the rights of the Prince, and rejected the idea of laws as the work of a people whose assent gave necessity and universality to them. Haller had translated his own work in to French. Hegel's reply to Haller is in the Philosophy of Right (para 258 Remark).

The Historical School of Law 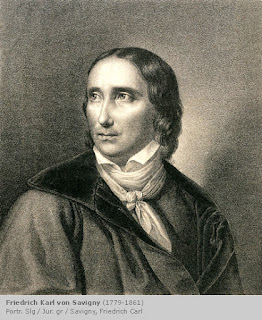 Hegel also opposed a purely historical conception of law (Introduction, para 3). This was then associated with Ritter von Hugo (1764-1844), but soon after with Friedrich Carl von Savigny (1779-1861, above). Thus he criticises the injustice of Roman family law, for example. [On this Osmo recommends JP Kervégan's Introduction to his French edition of Philosophy of Right, 33-39.]

In the Philosophy of Right, Hegel endorses a bicameral system including a hereditary Second Chamber, though in 1831 he criticised it. This was an Anglican model, though the democratic and monarchical harmony of Prussia was more advanced, or so Rosenkranz says. Hegel saw the military as a separate caste and this too, says Rosenkranz, was not appropriate to Prussian reality. Neither did Hegel understand the particularity of Prussian local government, which is different both from the French départements and from the situation in Russia.

The Preface also is important for its contemporary significance. The Wartburg Festival on 18 October 1817 on the 300th anniversary of the Reformation in Thuringia, where Luther had translated the New Testament, had featured the lighting of the October fires. Haller's book had been burned. A distrust of teachers and a Secret league were afoot. The murder of Kotzebue in 1819 had brought to light a fanatical quality in the German youth. Hegel was appalled at the irrationality and empty slogans of fraternity and unity. Hence he stressed the reason already present in the world. As he had criticised reliance on the past in Haller, here he rejects an unfounded vision of the future. Hence the famous:

Or in the original German:

In the second edition of the Encyclopaedia (1827), Hegel clarified that wirklich here meant not empirical existence as such, but existence in harmony with the concept of reason. Immediate reality, mixed with chance, on the other hand, may be supremely irrational. People were concerned nonetheless that this was a quietist maxim, unsuited for a developing state like Prussia.

Hegel also alienated people by condemning demagoguery not only in general terms, but Jakob Fries in particular and by name as a “master of platitudes.” Fries was suspended between 1818 and 1824. Hegel had been a Privat-docent with him at Jena and had succeeded him at Heidelberg. Hegel dismissed his concern for the Fatherland, love, etc. Rosenkranz says that this material should have been left out:

“A growing antipathy to him, going as far as to make relations irreconcilable, became established amongst all those who adopted the perspectives of Kant, Jacobi, de Wette and Schleiermacher together, and nationalism.” (515)

Hegel became influential amongst educated civil servants, which led to a violent reaction against him.

In February 1822, the Halle Literary Paper reviewed the Philosophy of Right. The review cited Fries in the passage that Hegel criticised and said that Hegel was unjust and in fact took a similar line himself elsewhere. It was ignoble to hit a man when he was down, it commented. Hegel had not dreamed of personal humiliation, so he said, and called for the protection of the Home Secretary from a “denunciation.” He was not happy to be criticised in a journal supported financially by the Prussian state. The Home Secretary Von Altenstein had previously written to him in August 1821 (Corr II, L397) saying that one must indeed not condemn reality without first understanding it. In this case, von Altenstein threatened the journal with withdrawal of authorisation if it were not tighter in its editorial policy on reviews (Letter of 26/7/1822, not in Hoffmeister edition of Correspondance).

Hegel offered something more than baseless systems of ideas or the nostalgic enthusiasm of the Burschenschaften. Hence he drew students eager to hear of the practical reason and freedom already in existence. Thus a kernel of supporters emerged, which slowly expanded.

One final anecdote has Hegel visiting an arrested student in prison by means of a boat on the river Spree. Osmo refers to Jacques D'Hondt, Biographie (chapter 15) for an interpretation of this.