(The article below is reproduced at hegel.net with the kind permission of its author, Stephen Cowley. It first appeared 9/2012 on the hegel.net Hegel mailing list and was then published 11/2012 as article with the pictures below on his blog ‘Hegelian News & Reviews’) 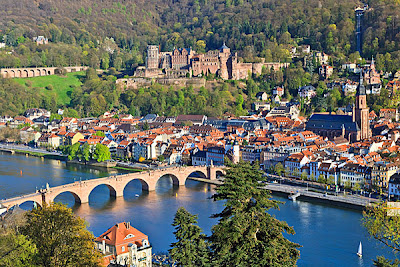 This is an account of Hegel's time in Heidelberg from 1816 to 1818, drawn from Karl Rosenkranz's Life of Hegel (1844), the first biography of Hegel. It includes discussions of Hegel's essays on Jacobi and on the Wurtemberg Estates. I exclude from this the chapter on the first edition of the Encyclopadia (1817), which I have translated in the previous post.

As a schoolteacher at the Gymnasium  in Nürnberg, Hegel increasingly kept a look-out for academic positions. One came up at Erlangen in Summer 1816, but his colleague at the school, Heller, got the post. Soon though, Hegel got the post at Heidelberg, where he had friends and supporters in Scheler, Thibaud, Creuzer and Daub. [It is typical of Rosenkranz to mention these relationships with contemporaries, leaving scope for later interpreters to look more closely at them. - SC]

The remuneration at Heidelberg was 1,300 florins and amounts of various kinds of wheat. Daub noted proudly in a letter that Spinoza had been invited there, though in the end he had not come. A short essay on philosophy in the universities (SW17; Correspondance II, L284) dates from this time (Raumer is the source for this.)

There were already ideas of giving Fichte's old chair at Berlin to Hegel. Raumer, Solger, Link and Niebuhr worked on this on Hegel’s behalf, but the idea came to nought at the time. Niebuhr was a privy-councillor. The Prussian Minister of the Interior wrote to Hegel, referring to his lack of teaching experience and observing that what experience he had was many years ago. Could he give lively and convincing courses, he was pointedly asked, given the importance of liveliness where students are busily focused on remunerative courses. Hegel opted for Heidelberg for the time being.

Hegel’s wife Marie stayed in Nürnberg following a miscarriage and Hegel left alone for Heidelberg where he arrived on 19 October 1816. Here he met Eschenmayer, the brother of a future opponent of his philosophy. He also met Paulus and his family again. Paulus’ wife mocked reference to "absoluteness", but liked Hegel for his enthusiasm for the theatre. They spoke freely and she was sorry when he left for Berlin. Hegel took up again with Voss, Schelver, Daub and Creuzer. Hegel lived on the Friedrichstrasse and dressed in grey.


At first, he had only four students, but in lecturing on the Encyclopaedia 20 attended the course and for his course on the history of philosophy there were 30 or more. He lectured here for the first time on anthropology and psychology (i.e. subjective mind) and on aesthetics. Here he could take inspiration from the Boisser[ée gallery and the local scenery, architecture and sculpture.

Carové was a jurist who wished to modernise Catholicism. He took an interest in animal magnetism and later moved to Berlin.

Yxkull was an Estonian nobleman who had fought with the Russians and was seeking scientific culture. He found from Hegel a “benevolent politeness as well as irony.” According to Yxkull, Hegel told him that:

“religion was philosophy in an anticipatory state; philosophy was religion in a completely conscious state. Both sought, only by different means, the same thing, namely to know God.” (470)

Thus he ought not to trust a philosophy that was immoral or irreligious.

H.F.W. Hinrichs (1794-1861) held a seminar at which many people from the different faculties met together, using the Phenomenology to guide discussion. Hinrichs was a right Hegelian, according to Osmo, who taught at Breslau, used Hegel's vocabulary in commentaries on Goethe's Faust and on Schiller. He produced a critique of Schleiermacher with an introduction by Hegel. He was then studying law and attended Hegel’s lectures on the Philosophy of Right. Hegel wrote him an important letter on scientific compositions (Corr. II L357).


Chapter 26 - Participation in the Heidelberg Yearbooks

Hegel contributed two original articles to the Heidelberg Annual for Literature. In this publication, Hegel took charge of the philosophy and philology side. Philology is a German term indicating something like literary-historical scholarship in English. In volumes I & II of the Annual, he contributed an essay on the Works of Jacobi, which had recently appeared, and another on the Wurtemberg Estates.


The Works of Jacobi 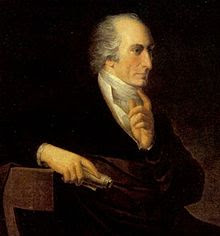 [Hegel had already discussed Jacobi in the Critical Journal. Jacobi had recently published Divine Things and their Revelation (1811).  Hegel's essay has been translated into French (Recension des Oeuvres de F H Jacobi. trans. A Doz, Paris: Vrin, 1976), but as far as I know not into English. Jacobi has also been translated into English by George di Giovanni, though not the work named above.]

In his essay, Hegel avoided the dispute between Jacobi and Schelling. Jacobi had ignored recent work on freedom by Schelling and this was occasion of some animosity. Hegel did not withdraw the criticisms of Jacobi that he had made in the Critical Journal in 1802, but returned to them in a more considered tone. The criticisms were:

But underlying these, the main issues he discussed under these heads were the relations of substance and subject and of necessity and freedom. On much he agreed - freedom, immortality, apprehension of the absolute in the form of mind, as personal – but not on immediate knowledge, which would exclude the mediation necessary to discern necessity. Hegel wrote:

"God is not a dead God, but living; he is still more than the living God, he is spirit and eternal love." (477)

Rosenkranz hence discusses the role of mediation in Hegel s idea of God – the relations of the persons of the Trinity, divine self-consciousness and creation and the proofs of God s existence. He speaks of the later charge of Pantheism:

"as if the self-consciousness of God in man excluded from itself the proper self-knowledge of God." (478)

Jacobi and many others appreciated the conciliatory tone that Hegel had adopted. In the wake of the article, Jacobi visited Heidelberg and the two embraced. Hegel mentions this to Victor Cousin in a letter (Corr. II 5/10/1818, L344). The writer Jean Paul also visited Heidelberg. [To interject: this reinforces the impression I have occasionally expressed of a constructive relation between thought of a more common sense character and Hegelian speculation that is also found in the Difference essay, though less so in the Phenomenology, reliance on which leads to some needless polemic on the part of modern defenders of Hegel. - SC] 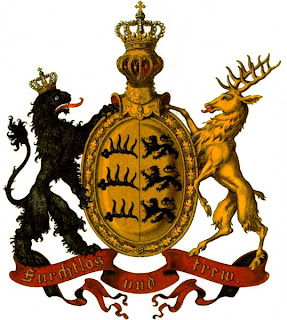 The Crest of the Wurtemberg Estates

[The second essay Hegel contributed to the Heidelberg Annuals was on the Würtemberg Estates, but the reception here was not so pleasant. Frederick I, the first King of Wurtemberg, was seeking conformably to the Congress of Vienna to give his country a constitution. [Note: this seems to be a version of the famous Charte offered to France by Louis XVIII around the same time. - SC] Hegel noted the popularity of the old forms of government. He wrote:]

"If the Princes of the new Kingdoms had wished to thoroughly deceive their peoples and to win glory for themselves, so to speak, before God and men, they would have restored the supposed old constitutions to their people..."

Frederick I was above such dupery, he recounts. Hegel says it would have been Machiavellian to have kept the old forms, like Augustus and Tiberius kept republican forms, when the situation had so changed over 25 years. [Note: The distinction of form and content is often applied by Hegel in his descriptions of political change. The views of Laurence Dickey on the politics of Wurtemberg in which a popular protestant interest sought to contain a Catholic South German monarch are also relevant in interpreting this essay more generally (see previous post). - SC]


In March 1815, Frederick I had called together the nobility and some bourgeois representatives. He gave a speech announcing the abolition of differences of religion and region and the creation of a single Kingdom with offices open to all on a proportional basis. This was by means of his granting a constitution. Hegel expresses the suspicion that this courtly project is taking advantage of public lethargy and pronounces a wordy judgement on it in this vein. He discusses, Rosenkranz recounts, the fundamental rights of this Charte Wurtembourgeois, including:

The forces Hegel sees at work are the wish of the monarchy to limit the aristocracy and the acquisition of power by the Third Estate. This required a sacrifice of historical positive rights. The Estates praised the Good Old Law (an evocative local phrase), recognised a need for necessary changes, but approved only those that served their own interests. The Third Estate calls itself the People and Hegel recognises a mystical identification here. He sees little concern for the external reputation of the State.

The people were a part that made itself the whole, yet acted against other parts. The phrase People equivocates between the middle classes and the crowd. Hegel wrote against publicists who would exclude people from the administration of justice by means of legal fees. This in his view had brought the magistrates into disrepute and led the State to exercise authority over local appointments.  Age and wealth were not sufficient to the office of elector, for they related to no particular sphere.

"in short, he believed that the Estates of Wurttemberg had done the opposite of what the French Revolution wanted, to create a state starting from reason. On the contrary, they had had a sense only for the historical aspect of things, without bothering to inquire of it whether it was reasonable or unreasonable." (484)

They had spoken of the "poison" of French principles but had not looked at the content. The introduction, says Rosenkranz, is a masterpiece. The essay was reprinted by the Volksfreund newspaper and is found in SW17. For this, the aristocrats denounced Hegel as a servile creature, for he defended the rationality and popularity of the Royal Will against their egoism, and against the Altrechtler [defenders of the Old Law].

[This concludes my coverage of Book II of Rosenkranz's biography. The concluding Book III deals with Hegel's time in Berlin from 1818-31. - SC]