(The article below is reproduced at hegel.net with the kind permission of its author, Stephen Cowley. It first appeared 02/2013 on the hegel.net Hegel mailing list and was published 09/2013 as article with the pictures below on his blog ‘Hegelian News & Reviews’) 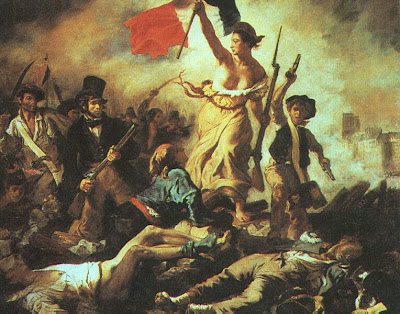 After some remarks about scholarship on Hegel's political philosophy, I summarise Hegel's political writings and reputation from the 1820s, including his response to the July 1830 revolution in France and the essay On the English Reform Bill (1831). The information is drawn from Karl Rosenkranz's Hegels Leben (1844), the first biography of Hegel.

I have already discussed common 19th and 20th century interpretations of Hegel's political philosophy in my summary of Domenico Losurdo's writings and essay on Jacques D'Hondt (1920-2012). The scholarly situation was transformed in 1973 by the work of Karl-Heinz Ilting (1925-84), who published a four volume collection of student notes of Hegel's lectures.


Hegel had lectured twice on Natural law in Jena, his views at this time being represented by his early essay on Natural law, his contemporary manuscripts and the Phenomenology (1807). He next lectured on Natural law in Heidelberg (1817) and Berlin (1818, 1819) and on the Philosophy of Right in Berlin (1821, 1822 and 1824). These latter dates are drawn from John Burbidge's Historical Dictionary of Hegelian Philosophy (2000). The content of the natural law lectures is virtually identical to that of the Philosophy of Right, though the text used was the objective mind section of the first edition of the Encyclopaedia (1817).


Ilting's interpretation supported Jacques D'Hondt's view that there was a contrast between Hegel's lectures and private views on the one hand and the published views in the Philosophy of Right on the other. Hegel's real views, it was claimed, were significantly to the left of the Prussian establishment of the Restoration era, for example on the role of the monarch. Ilting's work caused a stir in Germany and gave rise to a report in the Spiegel in 1973, though it is not available in English. Earlier recently translated manuscripts from 1817-19 do not bear out Ilting's views in any great degree. Nevertheless, something along the lines of the liberal interpretation of Hegel appears to be incorporated in Terry Pinkard's biographical work on Hegel, at least to judge by this recent bookshop lecture video.


In my view, Hegel sees social arrangements as instances of Gesetzsein (lit. "posited being"), that is, things that have come about for a reason. Hence there is a drive in his work to identify what is rational in positive social arrangements. This however, is consistent with advocacy of social reforms where circumstances have changed or reason itself has developed new understandings of the relevant facts. As a result, Hegel's social thought is not intrinsically conservative or revolutionary/liberal at a philosophical level.


The liberal interpretation of Hegel extends to similar interpretations of his response to the July 1830 revolution in France and the essay on the English Reform Bill (1831). However, in doing so it is clearly at odds with much of the primary evidence supplied by Rosenkranz which I summarise below.

In 1830, the July revolution broke out in France, whilst in Germany another reformation was celebrated - the Tricentenary of the Augsburg Confession. In this year, Hegel was Rector of Berlin University. He delivered an Address in this role.

The Celebration of the Augsburg Confession 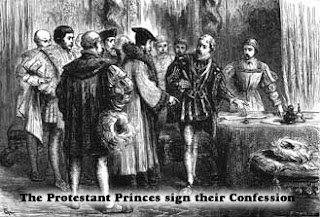 The Augsburg Confession (25 June, 1530) was a Lutheran document. The Prussian state however, wished to see the unification of the Lutheran and Reformed churches. The royal house of Hohenzollern had passed from the Lutheran to the Reformed faith and wished to see the Confession as a harmony. A wish for unity had been expressed in 1817, when the Reformation itself had been celebrated, so not everyone wished to draw attention to an expression of Lutheran doctrinal differences.

In 1826, a letter of Hegel to his children, then at Nuremberg, tells them of the battle of Gustavus Adolphus and Wallenstein there in the cause of Reform during the 30 years war.

Hegel wished though, to see the objectivity of Catholicism and the inwardness and subjective nostalgia of Protestantism overcome and united by the agency of philosophy. In his address, he defended the idea of 'justification by faith' against the supposed Pelagianism of the Roman Church. He drew a picture of the Roman Church of the late 16th and 17th centuries as corrupt and oppressive of the freedom of science and of faith. Celibacy undermined the family; the exaltation of poverty undermined work; bigotry justified mental laziness; and obedience exalted as virtue undermined conscience. The rejection of royal sovereignty, marriage, property, and self-certainty weakened the State. [There would be ready replies to some of this.] In contrast, he praised Protestantism.

At this time, Hegel also supported the idea of a church for the university, which had 1,800 students and around 100 families of lecturers. Berlin had not inherited church funds or buildings, but the case was strong in principle.

He fulfilled his tasks as Rector scrupulously. There were no outbreaks of demagogy amongst the students. In one case, a German hat was mistaken for a French cocard [revolutionary symbol], which gave rise to a comic story on the subject.


Chapter Eighteen The Critique of the English Reform Bill 1831

Hegel had familiarised himself with Prussia, the schools and barracks so much maligned and mocked. He now saw it in a different light. Rosenkranz writes:

"He felt so at home there, so happy, that he had come to abandon constitutionalism and to find the salvation of states in the monarchical principle as such, even deprived of popular representation, budgets, freedom of the press and public spirit. [...] It was thus that his political views turned more and more towards conservatism." (617)

"The people" were simply a mass of atoms, the voting of taxes by the Estates [an important check on the executive] was even an injustice, for it limited the powers of government; even elections for representatives seemed a resort to unreason.

The July 1830 Revolution in France

In 1830, the Bourbon dynasty of Louis XVIII that had been set up in 1813 was challenged in France in what became known as the July revolution. This resulted in the "July monarchy" of Louis-Philippe which is considered to be a move towards representative, liberal government. This was supported by Hegel's friend Victor Cousin. Revolutionary activity spread to Belgium, leading to Belgian independence. Rosenkranz writes:

"Disposed as he was, the event of the July [1830] revolution was a terrible blow for him. We lack written documents sufficiently important to be able to give an idea of Hegel's state of mind at this time." (618) [This of course, leaves room for doubt.]

Rosenkranz nonetheless compares Hegel to Niebuhr (1776-1831), the historian of Rome, who lamented the resort to arms. He cites Niebuhr at length. Although Hegel disagreed with him on Roman history, he shared his political concerns. Hegel read the newspapers thoroughly and drew on this to justify his opinions. He copied material from French, German and English newspapers. For example, when the chamber [of deputies] distinguished 'public reason' from 'public opinion', he called the first an "unheard of category". (619-20) Rosenkranz records:

"Now, as a number of his friends and Berlin students, notably Gans, were of a different opinion, to the point of enthusing over the July revolution and its possible consequences, there followed from then on violent discussions, often filled with animosity. (620)

When it appeared that the revolution in Belgium would succeed, Hegel was beside himself. A letter to Göschel (Corr III, L659) supports this. Varnhagen wrote to Rosenkranz on this (24/4/1840):

"You know, Hegel was in the last period totally absolutist and he felt the liveliest aversion for the popular movements. He felt in particular a hatred full of fury for the troubles of Belgium and when these could not be snuffed out he was completely beside himself. It was above all Gans who was entirely on the other side from him, who had to bear with this bad political humor." (620n)

Those who defended the substantial interests of the State and religion were condemned as servile and informers. Nonetheless, Hegel acknowledged the overriding interest in politics at the time.

Rosenkranz comments that when one thinks that Hegel had seen the first French revolution, the Napoleonic wars, then a period of peace and personal prosperity under the Restoration, it is not surprising that a new revolution and the prospect of further wars would be repugnant to him. [Walter Kaufmann takes up this comment, I seem to remember.]

In due course, Hegel found an interpretation of the necessity of the July revolution in the opposition between the Catholic religion and the demands of the State for autonomy. Both principles demanded victory. The only answer, he thought, was a reform of the church. In Germany, there was no such contrast of sacred and profane. There was a further conflict between hommes de principes and hommes d'État. [men of principle and statesmen, in French in Rosenkranz.] The latter had a grasp of concrete tasks. He expanded these ideas in both his philosophy of religion and philosophy of history lectures. 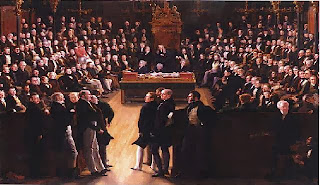 Now, when the English Reform Bill was proposed in February 1831, Hegel saw free rein given to the "English principle of a purely positive law". Rosenkranz says:

"Hegel was basically for the Bill, considered as an unavoidable measure demanded by justice and equity." (622)

There was an infinite disproportion though, between a historically granted right and a necessary rational right. A human right should not have the form of a special privilege. Hence he wrote a long article on the Reform Bill in the Preussische Staatzeitung (1831, see SW17). [For censorship of the article, Osmo refers to D'Hondt, Biographie, 387-95.] Hegel criticised:
- the weakness of the monarchical principle against parliament.
- the ostentatious character of political declamation, excepting Wellington's declarations.
- the bad state of informal private law.
- the cruel treatment inflicted on Ireland.
He lamented the depredations of large landowners, class rights, poverty amongst the people; church tithes and rich clergy; and the conduct of elections - this with an admirable erudition.

All in all, he painted England in too black colors and Germany too brightly in his despairing refrain on the former and praises of the latter, thinks Rosenkranz. He was arguing against blind admiration for England and denigration of Germany, but perhaps there is a morbid humor in the writing.

[Postscript: We have since covered Jacques D'Hondt's and Rudolf Haym's views of Hegel's politics in the Berlin period on this blog. I would recommend Walter Jaeschke's essay "Hegel's Last Year in Berlin" in Hegel's Concept of Action (ed. Stepelevich & Lamb. NJ: Humanities, 1983) for an informed, recent discussion of the above subjects. - SC]