(The article below is reproduced at hegel.net with the kind permission of its author, Stephen Cowley. It first appeared 01/2013 on the hegel.net Hegel mailing list and was published 04/2013 as article with the pictures below on his blog ‘Hegelian News & Reviews’) 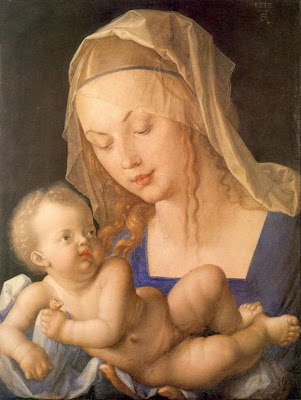 This post summarises the experiential basis of Hegel's interest in art during his Berlin period, as described in Karl Rosenkranz's Hegels Leben (1844), the first biography of Hegel, which also recounts Hegel's travels to other European towns and cities.

Hegel's Lectures on Aesthetics reflect in part his Berlin experiences. They have an ambitious dual structure, arranging artistic representation at first into a conceptual sequence of architecture, sculpture, music, painting, drama and the other literary arts and then employing another historical division into symbolic, classical and romantic periods. He sees the aesthetic contemplation of beauty as sharing the tranquillity of religious piety, though in a manner that is superseded or subsumed in Christianity.

His critics include notably Soren Kierkegaard, who used the Hegelian terminology of the aesthetic, ethical and religious to express a more pragmatic sensibility; and Benedetto Croce, who thought Hegel did not do justice to the nature and force of aesthetic spontaneity in this conceptual structure. Hegel had already discussed "religion in the form of art", as it appeared in ancient Greece, in the Phenomenology of Spirit (1807) and gave art a permanent place in his system as a form of "absolute spirit" alongside religion and philosophy in the Encyclopaedia (1817) prior to his move to Berlin in 1818. The Lectures on Aesthetics were published posthumously.

Rosenkranz states that the artistic treasures and exhibitions in Berlin stimulated Hegel's love for art. He was taken with music; he had the beginnings of an eye for painting; he was at home in poetry; and he was appreciative and receptive to architecture and sculpture. Hence to present Hegel as a dry and abstruse logician devoid of a sense for works of imagination is absurd. He spoke from the standpoint of art. The French translator of the Lectures on Aesthetics (Bénard) saw this better than have the Germans. This French translation appeared between 1855-1860 (available as PDFs here).

Hegel judged individual art works with insight, though he could also be unilateral and negligent in sweeping historical verdicts. In this his statements could be forced. His approach was more historical; Karl Solger's was more metaphysical.

Hegel commented on the Berlin theatre and on exhibitions of painting there and this contributed to his popularity. Aesthetic interests were more apparent in Berlin than political passions at this time. There was something epicurean and indulgent about this prior to 1827. Schleiermacher also expressed himself on aesthetics at this time.

The Berlin Monatschrift had dealt with questions of general and Church politics and censorship, but much of the press thereafter was frivolous in tone. Hegel brought a maturity of judgement into this environment, which was sometimes taken up in a mannered or pedantic spirit. 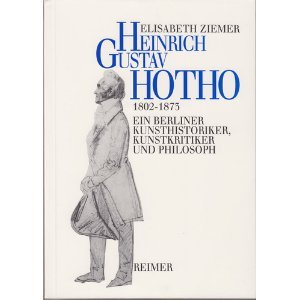 The best interpreter of this was Heinrich Hotho (1802-73) who went on to edit Hegel's Lectures on Aesthetics (1832-45). Hotho had studied law in Breslau, then philosophy in Berlin and went on to work at Berlin Art Museum, where he specialised in painting. He lectured on aesthetics himself in Berlin from 1829. Hotho also wrote a History of German and Dutch Painting (1842-43) and other works on the same theme. KF: See Hotho’s works (in German) as PDFs

He wrote a striking pen portrait of Hegel. 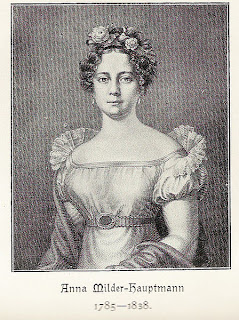 Hegel relentlessly visited concerts, theatres, etc. He knew Anne Milder (above), who sang Gluck and Mozart. She had been brought up in Constantinople and Bucharest before moving to Vienna, where she had met Beethoven, before moving to Berlin. The theatre critic Heinrich Rötscher (1803-71) related Hegel's ideas to the theatre. Hegel also contributed a review of Schiller to the press.

In Dresden he saw the paintings of Gerhard von Kügelgen (1772-1820), who painted Goethe, Herder and Schiller. Kügelgen was later killed in 1820. Hegel expressed a preference for the paintings of Albrecht Durer (1471-1528) of Nuremberg (whose portrait of Virgin and child holding a half eaten pear, currently in  the Kunsthistorisches Museum of Vienna, is reproduced above) and Rembrandt, though he admired Kügelgen's portrait of Christ.

Hegel kept notes of his own experiences and of reviews in the Morgenblatt. Rosenkranz reproduces some of Hegel's notes, describing the expressions of the mouth; on whether portraits of Mary Magdalene were truly repentant; is a portrait suffused with a character, or not?

Hegel used these to add topicality to his lectures.